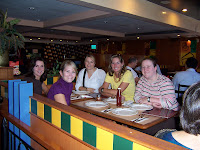 Sibyl and the Jets at Pizza Hut

We arrived in India at about 6 am on a Sunday. We were picked up a short time later to go to church. After church, we went to lunch with the medical team at Pizza Hut. Pizza Hut in India! It would've been really cool except we ended up calling and having pizza delivered to our hotel 3 more times that week...pizza 4 times in one week...ugh!

Monday we were on the road most of the day. If not for the hilarity we had in the van it would have been a long, long day. We made a stop at a children's home where we got to meet a pastor and his wife and the children they care for in their home. The next three stops were at water wells dug in different areas by AIM. The one in the picture below was dug by our church in honor of my son's senior class. Well, we didn't dig it ourselves, but purchased it. 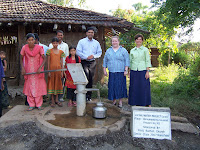 Our last stop was a another village where the medical team was ministering for a couple of days. When we got there we played some frisbee with the children and then passed out some coloring sheets, colors, and dumdums...you know, the suckers. One Indian man said, "In India we say lollipop." It cracked me up, I don't know why. We also giggled a little at one older guy who put it in his mouth without taking off the paper. Later that evening everyone gathered for a time of worship. I was sooo tired and distracted by the lizard that was crawling on the wall behind my friends' heads. I spoke on attributes of God from Psalm 139. Soon after, we headed back and arrived at our hotel around 3 am.
And that was the first day...