If our Life Groups (Sunday School) at our church we are using a curriculum that uses a workbook called Divine Encounters in the Old Testament published by Clarity Publishers. The workbook is for our class members to work on during the week in their personal Bible study and it prepares us all to participate in discussion on Sundays. We are walking through the OT (at times in giant leaps) and this week our lesson is on Rahab. Each week of study starts with a question to ponder during the week. I am posting this week's question here and really want your comments to use for this Sunday...for my class girls as well as anyone else who happens onto this blog this week!

Does God really want us to take serious risks?

Jeanette
Posted by Jeanette at 11:03 AM 3 comments: 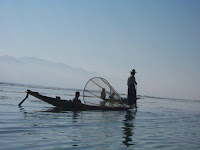 I feel like I've neglected this blog. Though my heart is full I have found it difficult to sit down and put into words all that I experienced on my trip overseas. One of the most beautiful places on the planet is Inle Lake (in my humble estimation). I love, love the beach. I would probably say that my favorite place to be is a beach. The gulf coast of Florida is amazing. We've taken our kids to Panama City Beach and Destin several times. It's incredibly beautiful there -- white, sandy beaches and clear water. I've been to several places on the Carribean and think it's one of God's greatest creations. Even though it's not the beach, Inle Lake is incredible. It's a huge lake surrounded by mountains in the Shan State of Myanmar. I took this photo from a boat on Inle. The big, cone-shaped thing on the boat is for fishing. The fishermen row with one leg and balance on the other. We passed a boy standing on the end of his boat, like the man above. He was watching us and seemed to be trying to show off a bit with his rowing. He lost his balance and fell into the water -- it was freezing!! We felt really bad for him, but were amazed at how they stand on the very end of the boats. There are towns and villages all over the lake. Some houses and other buildings were on stilts out over the lake. We left our boats at our first stop (after a one-hour ride across the lake from the town where we were staying) and walked about 40 minutes to a village. We found a preschool run by the UN on the road to the village. Some of our group crossed a bridge that was really only 2 small logs side-by-side over a creek and went into the yard of the school. The kids ran over with great excitement. Our girls passed out some small gifts we had brought with us. We actually had 2 Burmese girls with us that helped with translation. When all the kids had something, they sang a song. We have no idea what the words of the song meant, but they were adorable!
The people of Myanmar are incredibly generous, friendly, and welcoming. The economy around the lake benefits from tourism. Because tourism is down a bit after the unrest of the Fall, the people are excited to see visitors. And, I was excited to be there. At one point on the boat ride across the lake one of my friends that was traveling with me looked at me and said, "Did you ever think you would get to experience something like this?" She's a few years older than me and has been to lots of places all over the world. I had to reply, "No. I didn't even know somewhere like this existed until just recently."
"The heavens are telling of the glory of God; and their expanse is declaring the work of His hands." Psalm 19:1
Serving the King,
Jeanette
Posted by Jeanette at 7:31 AM No comments: 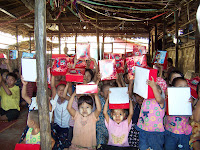 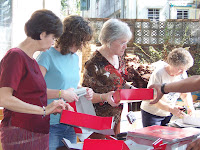 Our first full day in Myanmar was spent working on the Boxes for Burma project. Our congregation here collected and sent small toys and stuffed animals as well as a monetary donation for the project. The fun part was filling the boxes and passing them out. We spent the entire morning putting boxes together and filling them with books, pencils, toiletry items, and some food items. We also filled some canvas bags that would be passed out to adults. We were there at the very end of the project but heard reports of how the boxes had been distributed literally all over the country over the last month to those in poverty situations. We were able to go to an orphanage (see above) to pass out the boxes and interact with the children. On the way, we passed out boxes to children we saw along the side of the road. We literally stopped the van and handed them out the window. We also learned a Burmese phrase that we were able to say to those we met.

It was absolutely humbling to participate in this project. I was reminded of how I am blessed my life is and how unimportant earthly possessions are. But since I have been given so much I hope to never fail to give to those who have less. I heard President Bush speak this summer and he reminded those listening that to whom much is given much is required.

More later...Jeanette
Posted by Jeanette at 11:20 AM No comments:

It's almost 6:30 on Sunday morning...I've been awake since 4:45 am. The hardest part of being home from any trip overseas is the body adjusting back to the right waking and sleeping cycle. So, here I am awake and thinking about my trip and how it impacted and will impact my life. The trip was totally amazing. I am sitting here and do not even know what to type, where to begin. I am consumed with humility that I was able to participate in something so life altering and grateful for the things I saw and did and the people I met. I hope to share some of those things in the days ahead.

I am not teaching my class this morning, but was looking over the passages of Scripture that will be covered. The main text is from Exodus 19 and 24 and centers on the servant-leadership of Moses. Numbers 12:3 describes Moses as the humblest man on the face of the earth. His humility was key in his life. The verse is presented as a paranthetical statement in contrast to the attitudes of Aaron and Miriam, his siblings. Moses was submitted to God and willing to follow God's leadership in his life. Therefore, God used him to lead His own people from bondage in Egypt and in the establishment of His covenant with them.

Another key characteristic of Moses described in Numbers 12 is faithfulness. God saw him as faithful and, as a result, spoke to him in an intimate way. Faithful and humble. Willing to do whatever and go wherever. Let that be true in me that I, too, may hear the voice of God speaking to me and guiding my life.

Jeanette
Posted by Jeanette at 6:23 AM No comments:

Today's the day I head off on a great adventure to Asia! I am leaving with two friends from here and 2 that live in other states. We will participate in a project similar to "Operation Christmas Child" as well as other activities. The travel time from DFW to our final destination is about 36 hours -- yikes!! We will hit the ground running, however. I will covet your prayers on our behalf while we are away as well as this one for the people we will meet -- "The people who walk in darkness will see a great light; those who live in a dark land, the light will shine on them." (Is. 9:2)

Blessings to you all!

Jeanette
Posted by Jeanette at 9:45 AM No comments: