I just changed my profile - it used to note that I was the parent of one college student and 2 high school students. Now, well, you can read it for yourself just over there, to the right. It's 3 weeks and 1 day til the middle child goes to college. We started shopping for her dorm room last Saturday. It was fun and way different than dorm shopping for a son! The summer has been so much fun and the house has been busy - kids coming and going...and coming...and coming over... Except this week. They are all gone to Student Life Camp. Johnny leaves tomorrow for Boston - his dad is having cancer surgery - so it will be me and Jadee-dog having some girls' time.

I'm thinking ahead to the fall. I don't have a mission trip planned and I hope to change that. I am really hoping to go on a vision trip this fall. It seems like over the past few years I've always known what my next trip will be so it seems weird to not know for sure. I'm working on a project at church and a writing project so I've plenty to do but mostly, right now, I'm thinking about that profile change - it's going to be so different around here. Not only will Jessica be going off to college but I've gotten used to Josh being around again. He moves back just before Jessica. It's going to be strange and quiet...

The anticipation of the unknown brings the great reminder that God loves those children I call mine more than I do (hard to fathom) and He has a great plan for them and for me and my man. Change is sometimes scary and sometimes a little sad but I am confident that the next chapter will be an adventure, just like all the others!

Jeanette
Posted by Jeanette at 9:50 AM No comments: 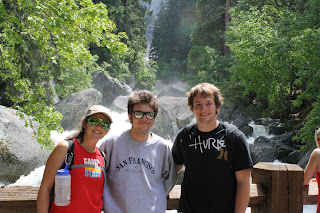 My kids on the Vernal Falls Footbridge 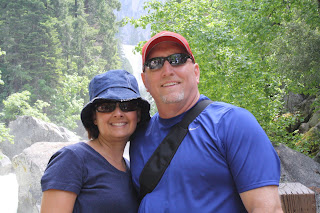 Me and my man on the Vernal Falls Footbridge (don't you love the hat?) 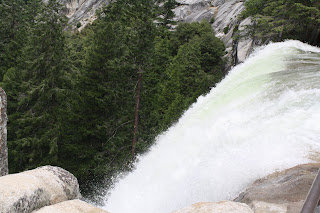 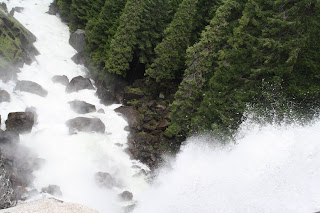 
I just read a news article on the FoxNews website about 3 people that went over the falls. They, apparently, climbed over the railing and out onto some slippery rocks and fell in, then went over. They are missing and presumed dead. I wrote about our hike to Vernal Falls in my post California Vacation. The force of the water made for a spectacular sight and it was so worth it to get to the top and see it. Really, it was one of the most impressive things I've ever seen in nature. The Emerald Pool is at the top but we were warned by a park ranger not to get in the water. It's dangerous - particularly this year when they had record snowfall.

I feel sad for the friends and family of those missing. I feel sad for the people who witnessed the 3 going over. The article reported that it's a 317 foot drop and you can see in the above picture that I took from the top, camera pointing down, what's at the bottom. Of course, I'm super afraid of heights so I barely would even go close to the rail. I did have a photo taken by the rail but I feel one picture of me in that hat is enough for one blog post. (Since my last birthday I'm more aware than ever of my age and I'm trying to protect my older skin - I'm getting a lot of use out of that hat.)

I have more vacation pics posted on fb soooo if we're friends, hope on over to my profile and take a look! Yosemite is fabulous!

Jeanette
Posted by Jeanette at 10:17 PM No comments:

Yes, you read the headline right - I heard on the news this morning that today is the 18th day - in a row - that we have been over 100 degrees in North Texas. Man, it is hot! Our training for the White Rock 1/2 Marathon is definitely hard in this heat. Johnny and I left the house at 7:20 AM both days this week to try to beat the heat. Yesterday, we got back to the house and jumped into the pool - in our running clothes - just to try to cool off.

The summer has been super crazy so far. If you've been reading then you know we did back-to-back weeks on mission trips. We got home from the second one on a Thursday and left 3 days later, on Sunday, for our vacation. We've been home a week and a half and I think something has been going on every single day since then. Nertz night, Bible study, kids in and out and in and out. Last Wednesday I was trying to do some work and the doorbell kept ringing and kids just kept coming over. I wake up in the morning and check to see who's here - if all 3 of mine are and if there some others as well.

So, it has been a really great summer so far. Really great. Johnny and I just got back from setting up our lake house for the week. Well, it's the Wildwood (our travel trailer) at the campground on the nearby lake. We are about to take the boat out there. I'll be back home tonight for Bible study but I think there will be some fellas out there later. They run in packs these days.

One month from today is the day we will take Jessica to college - pack up her stuff and move her off for the first time. Josh will move back a day or so before that since he's a small group leader for SWAT (student welcome & transition week). It will be so strange to only have one child at home.

Here I Raise My Ebenezer

I took this picture at Yosemite National Park last week. It was the second uphill hike of the day and I was not sure if I would make it. Plus, I am really scared of heights and it was a steep walk up the side of a huge rock mountain. The view was magnificent and so totally worth it. In the distance were snow-covered mountains and waterfalls. God's creation reminds me that He is glorious and the ultimate Creator.

I saw this pile of rocks and had to take a picture. I immediately thought of that old hymn, Come Thy Fount of Every Blessing, and the verse that contains the phrase in my title. The story is from 1 Samuel 7:10-12. Basically, the Israelites were in a battle with the Philistines and God caused a storm that allowed the Israelites to defeat the Philistines. Then Samuel, the prophet and leader, set up a stone, a stone of remembrance, and named it Ebenezer and said, "Thus far the Lord has helped us."

I don't know why I am repeatedly surprised by God. He is amazing and He does amazing stuff. That's who He is. But, still, sometimes He blows me away. Like today. I'm working on a new project for our i68 missions ministry and have received so much positive feedback and offers to help that I have felt truly blessed and affirmed with the direction we're headed. Then today a friend called to tell me about something God has put on her heart. She didn't know about the new project because (1) I've been away for the last 3 weeks and (2) I'm just now really spreading the word & telling others about what's going on - besides our missions committee, which I told them at their last meeting. Anyway, it seems as though God was telling my friend on His own before I could. Because He's like that and He does what He wants. Incredible.

How do I forget at times, thus far the Lord has helped me? I need to put my own rock pile somewhere around here, I guess. He is faithful. And I am blown away.

Jeanette
Posted by Jeanette at 2:56 PM No comments:

I typed the following in Yosemite National Park when I didn't have internet, cellphone service or even tv:

My calves were screaming as we made the descent. I was completely soaked – every article of clothing I was wearing as well as my shoes. Even though we were well below the waterfall the roar of the river made conversation difficult – particularly because we mostly walked single-file as a result of all the other people going up and down. A three mile round trip with a 1,000 foot ascent (that’s one thousand feet up and one thousand feet down) to the top of Vernal Falls and the Emerald Pool. When we drove into Yosemite National Park the day before the park attendant asked if it was our first trip to the park. Yes, we told her. She then reported that we picked a great year to come – the waterfalls were still flowing strongly as a result of the excellent snowfall of the winter. We found that to be true when the overspray from the falls on the trail made us look like we had gone for a swim. Even now I know I will be sore in the morning but it was so worth it to get to the top and see that amazing site. On the way down I told God how amazed I was at His creation. I had already been thinking such thoughts the day we went to the aquarium on the bay in San Francisco. I’ve never seen an orange fish with a perfect fuchsia square on it before. In fact, I’ve been to aquariums before and I am always amazed at the variety of fish and other underwater creatures. They even had this one shallow pool where visitors can touch some rays and small sharks. One little ray kept poking his head up. The aquarium girl said he was trying to get his eyes above water so he could see but I so think he just wanted out. Freedom!


We ended the day with another hike. Yeah, because one 3-mile hike up to a waterfall and back was not enough for one day. (I’m super thankful I’m in training for a half-marathon or I would have never made it!) This one was just 2.2 miles round-trip but ended on the top of a huge, exposed rock that seems like it’s the top of the world. Well, maybe the top of Yosemite. We could see waterfalls and snow-covered mountains in the distance. We looked down on Yosemite Valley and, again, I just felt amazed. And, unbelievably happy that I had a chance to see the beauty of God’s creation.

It’s almost time to head home from our California vacation. We’ve made some great memories and seen some amazing sights. From the Go-Car adventure in San Francisco to the little cabin in the woods, I feel blessed beyond measure. And rested in a weird way since every part of my body aches. I just hope I can get out of the bed in the morning…

Posted by Jeanette at 1:39 PM No comments: