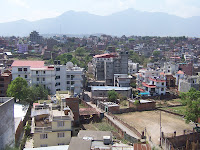 Here's the view from my hotel room window in Kathmandu, Nepal. It's a very crowded city (with traffic worse than India, if that's even possible) in a valley surrounded by the Himalayas. The Himalayas are an amazing creation of God...almost 1,500 miles long and containing some of the highest peaks in the world, including Mt. Everest. 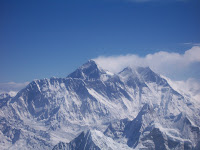 And, here's Mt. Everest. I took this photo myself from a small airplane that takes tourist out from Kathmandu for a one-hour flight out to Everest and back. As you can see, it was a glorious, clear day. I sat in wonder as I viewed the mountains and thought about what a rare privilege it was to be there. There's one peak along the way that our flight attendant pointed out as a holy mountain. Nepalese won't climb it. They worship the creation rather than the Creator.
O Lord, our Lord, how majestic is Your name in all the earth. Who has displayed Your splendor above the heavens.
And that splendor that seems to reach almost up to the heavens...
When I consider Your heavens, the work of Your fingers, the moon and the stars, which You have ordained; What is man, that You take thought of him? And the son of man, that You care for him? Yet, You have made him a little lower than God, and crown him with glory and majesty!
When I saw Everest, words like glory and majesty came to my mind. And, certainly, God tells us in His Word that He reveals Himself through creation. (Romans 1) Yet, this excerpt from Psalm 8 tells us that His priority creation is man -- men and women, boys and girls. We are the ones crowned with glory and majesty. 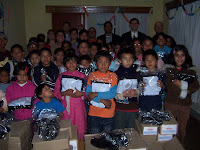 So, here are some of God's precious creations. Our organization has some children's homes there in Kathmandu and we visited one. This is actually children from 3 homes -- they sang for us both in English and their native language. We gave out school uniforms and shoes purchased by sponsors in the US. One of the most powerful moments of the whole trip was when one of the pastors asked one child to pray. When one is praying in Nepal everyone prays outloud. I've experienced that before in Venezuela and I think it's the coolest thing. Here we were, in this crowded room, and all the children were praying outloud simultaneously. It was almost more than I could take...the sweet sound of children talking to God with passion. Tears well up in my eyes even now as I type these words. These are children that have either been abandoned by their parents or are orphans. Yet, they have been brought into these homes where they are being taught about their Creator in a country that is largely Hindu and Buddhist.
O Lord, our Lord, How majestic is Your name in all the earth!

To You alone be the glory.
Serving the Creator and King,
Jeanette