For since the creation of the world His invisible attributes, His eternal power and divine nature, have been clearly seen, being understood through what has been made, so that they are without excuse. Romans 1:20

One of the most fun and awe-inspiring things I have ever done is to go on a 138-mile snowmobile ride through Yellowstone National Park. I had no idea it is so gigantic. What an incredible day! And, it snowed most of the day!

We were picked up by our guide at 6:30 am (yes, we paid for the privilege of getting up before dawn while on vacation) to go get fitted with all our gear and make the drive out to Yellowstone. Once we got there and on the snowmobiles we started out on our journey past the park entrance and on to the Continental Divide. During the day we saw three waterfalls, a mud volcano, several thermals, and miles and miles and miles of trees covered in snow. We stopped halfway through the day at a warming hut and our guide fed us some stew he brought along. It was so yummy and hit the spot after riding around in temps in the teens. We saw wildlife like coyotes, a bald eagle, swans, and some buffalo off in the distance.

While the entire day was quite an adventure, the thrill of the day was when we were on our way back and up ahead on the road was a herd of buffalo. Yes, on the road, up ahead, in the direction we were headed. Our guide told us to stay together and not to stop for any reason at all. Johnny kept driving and I kept snapping pictures. I've posted 2 below, along with some other photos from the day. Seriously, we could've reached out and touched those buffalo. We were that close.

I'm amazed at all I learned about God's creation during that trip through Yellowstone. The beauty of the park and the wonder of the boiling water coming out of the earth and the awesomeness of snow-covered acres lit up by the full moon (because we were late getting back and it was dark before we returned to our starting point) is beyond my ability to describe in words on a blog. This I know for sure, when God created the heavens and earth, when He spoke it all into existence, and said that it was good, He meant it. It's real good. 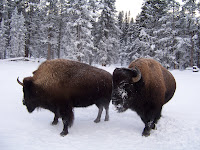 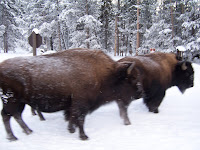 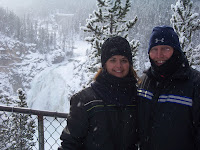 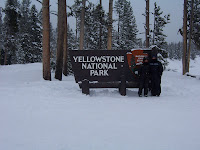 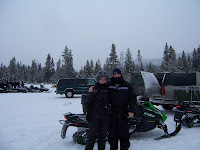 What a neat adventure! I just finished reading those verses in Genesis tonight and how cool to come read your blog and see it from your experience! Have fun... and hope you warmed up by a toasty fire!

Must have been a great adventure. I always enjoy checking out
"abound in hope":)

Looks like an awesome trip...so fun for the two of you. Can't wait to get back into our fusion study!