2 Day Get-Away in the Great State of Texas

Those of you who might happen to read this post and live life in close proximity to us know we've had an interesting few months. I can't quite come up with the right adjective for these days (weeks, months) but it's been a ride, that's for sure. Our youngest left for his senior trip on Monday so we planned to get away - with no real agenda and (yikes) without even a hotel reservation. For a suggestion for such a trip I headed over to TexasMonthly.com and decided on The Old-Fashioned Drive as a sort of guide. The OFD is a drive from Paris to Decatur. We didn't make it to Decatur but here's our 2-day get-away in the great state of Texas in picture and description:

Since Johnny and I bought my dream car - a little red convertible - we've talked about just getting in and driving. Spring days in Texas were made for it. 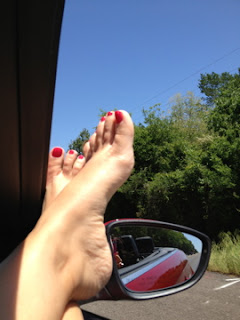 Our first stop was in Deep Ellum for lunch at The Free Man. I had the VooDoo Chicken Sandwich with sweet potato fries. The sandwich was grilled chicken with a spicy "voodoo" sauce and fried pickles on it. So yummy! 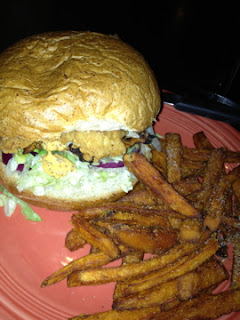 After lunch, we hopped on to I-30 and headed out of the Metroplex. Eventually we got to TX-24 and headed north toward Commerce. After a stop in Commerce that yielded nothing we got back on our way toward Paris. We stopped in the small town of Cooper and found the Miller Drug Store and Soda Fountain which, we found out, has been featured in Texas Highways Magazine. Johnny had a chocolate shake and I had a vanilla malt. The guy behind the counter told us he made them pretty much the way they've been made there for the last 60 years. He was trained by a lady who only recently retired after working there for about 60 years. He told me she trained him to make malts and shakes and the flicking of a towel. His great uncle opened the soda fountain which was later purchased by his grandfather then his dad and, hopefully, one day he'll be the owner of it. 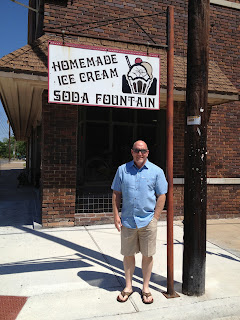 We finally arrived in Paris and what would a trip to Paris be without a trip to the Eiffel Tower! 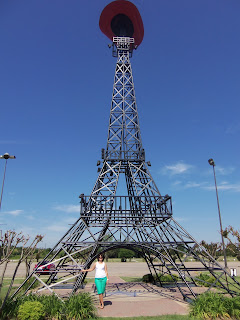 The old town square of Paris is filled with shops and storefronts in historic buildings. Downtown Paris was destroyed in 1916 by a fire but was rebuilt and is really a neat place. Several of the antique shops were closed on a Monday afternoon but there were plenty open. (probably more than Johnny Dickerson wanted to go to!) We walked around and enjoyed the beautiful Texas day and returned in the morning to the Paris Bakery for a bagel and really delicious cappuccino. 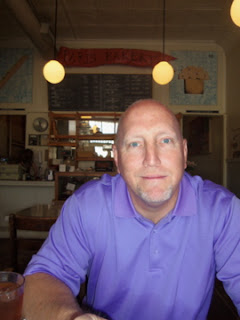 After a stop for some sunscreen, we took 82W and eventually 69N toward Denison. It was mostly 2-lane highway lined by trees at some points, fields, and cows. When we turned off of 82W and onto 69N Johnny laughed and said, "We're just driving through the country." You know, the country roads where the slower-moving trucks pull over to the frontage to let faster vehicles fly by pass. If they didn't pull over, no worries for Johnny - as he noted, that little red convertible has some kick to it.

We ended up on Denison Main Street around lunch time and went to CJ's Coffee Cafe. Delicious! Johnny had the meat and cheese board - they literally brought out a cutting board loaded with meat and cheese and 2 yummy buns that were kind of like Hawaiian rolls which, btw, are favorites at the Dickerson house.

After lunch we walked up and the street for a while getting Johnny's fill of antique stores for the next decade but ended up at Buffy's Cupcakes. Johnny had (no surprise) chocolate and I had The Elvis - a peanut butter cupcake with banana cream piped in and peanut butter icing and a banana chip to top it off. Again, so delicious!

The purpose of the trip was to get away from the stress of life (and events of these days) and, honestly, people. I understand that the nature of our gig is that people are our business. Frankly, it can be exhausting when it seems like there are so many needs. I'm not complaining - we have a beautiful life. And, God has been so faithful. My memory verse for these 2 weeks is Psalm 21:13, "Be exalted, O Lord, in Your strength; we will sing and praise Your power." His strength and power are enough. Sometimes we just need to rest. How did we travel before days of cars with GPS? From downtown Denison we typed in "parks" and found a nice, little park on Loy Lake. We just happened to pack the hammock that Jessica gave us for a combined Mother's Day/Father's Day gift. We decided to try it out. 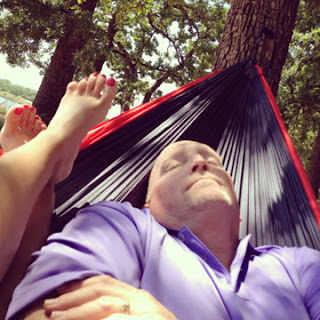 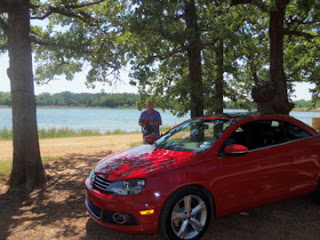 I've lived in Texas almost my whole life and Johnny has been a transplanted Texan for over 25 years and we realize there are some pretty neat places out there yet to be explored by us. With the empty nest part of our life rapidly approaching, we hope to take more get-aways in that little red car.