What Would You Give to Save a Life? 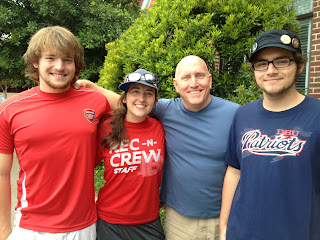 I was hanging out with these beauties last night and the subject of blogging came up. My oldest has been blogging daily about what's on his mind. We were talking about it in light of the presidential debate a couple of nights ago but the comment was made that I have not blogged in weeks. Months, actually. I've had a thought for a post in my head since June, though, so I'll see if I can make some sense out of it.

Weeks and weeks ago now I got emotional while teaching Life Group. I may have gotten emotional since then (if you know me personally, you know that is highly likely - I live emotions full on) but this day sticks out in my mind. Actually, it was June 10th and our Life Group had been doing a study of the book of Philippians and it was the last day so we were at the end of chapter 4. In Philippians 4:17 Paul wrote this, "Not that I seek the gift itself, but I seek for the profit which increases to your account." When Johnny preached a sermon on giving he said it's like God is saying to us, "I don't seek what's yours but you." (as if it's really ours any way) God's purposes on earth will be accomplished but it's our privilege to be participants. Paul wrote of his gratitude to the people of Philippi for their support of him but the message is that they got it. They got it that living their lives and giving of their possessions were to be about something greater than themselves.

Let me just interject right here that I am so guilty of being fixated on self. At times, I want to hunker down with those 4 whose faces I posted on this post and not be aware of hurt and suffering and need around me. Our schedules become busy and our lives so full that we are completely unaware of what's all around us. That's not how we are supposed to live though.

I asked the question in Life Group (here's the part where I lost it), "What would you be willing to give in order to save a life?" I mentioned a couple (his parents go to our church) that had reduced their worldly possessions to 8 suitcases and left the comforts of home to go live on a foreign mission field. We're not all called to do that, so I also mentioned the 18 million (I can't even type it without tears) people - I can't even fathom 18 million people - that are suffering from food shortages in Africa. In an area called The Sahel of Africa, nearly 1.5 million children are near starvation. There's a ministry website that counts the number of people who die daily from starvation - they report 1 every 6 seconds.  From my desk here in Texas I can't save 1.5 million children but I can't turn a blind eye either. Mother Theresa once said if you can't feed 100 hungry people then feed just 1.

We were never meant to hoard our blessings or our time or our families. That's not what Jesus taught.

My birthday was just a few days before that lesson on June 10th. A mother and her adult daughter often sit right behind us in corporate worship on Sundays. They gave me a fun card and gift and I was talking to them and thanking them. The mom's words penetrated my heart and have stuck with me. She talked about my travel and mission work and she said something about "all those lives you're saving."

I rarely feel like a life saver but I want to be one. Whether far away across the sea or right here in my community I know there's some lives that need to be saved. I've become fully aware of some chances I've missed just recently. Gosh, it hurts.

I'd rather have the profit to my account than the hurt. Not more profit in my bank account. I could care less about that except in what I need to take care of those 3 that God entrusted to Johnny and me. I want that profit that's like a big hug from my Father. To hear in my spirit, "Well done. You're getting it. You're living like you believe Me."

Weighing what I'm personally willing to give to save a life is a daily task. All I ask from God is that He make me willing to give more. That He never stops calling me and asking me to join Him in His purposes.

Jeanette
Posted by Jeanette at 11:40 AM