Johnny told me the other day that my blog has been neglected.  Poor little thing!  Needless to say, it has been quite a busy summer!  Johnny and I are headed out-of-town this weekend for a couple of days with some friends but other than that, all the excitement and traveling of the summer is pretty much over.  Jessica and Jacob are both working this morning and it's quiet around the house.  Oh yeah, and I'm working, even though it looks like I'm blogging...I'm just taking a short break!

I wanted to add a few pictures from our recent mission trip to Laredo.  Wow, what a week!  We had a group building a playground... (BTW, the are soaking wet because they worked the last day in the pouring down rain.  But, we praised the Lord for the rain because it made for cooler temperatures!) 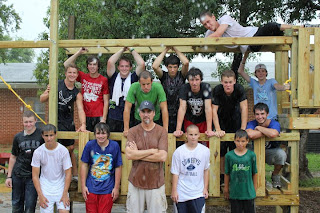 We had a group working at a soccer camp in the mornings...
(That's my Jacob with a group of kids at camp) 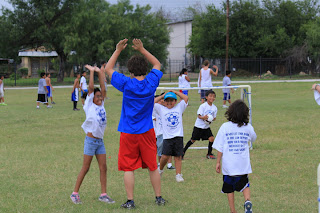 We had two groups doing morning VBS at two different locations.  We then took the VBS to the park for 2 nights and had sports, crafts, & a Bible story.  Tons of families came out to the park in the evenings! 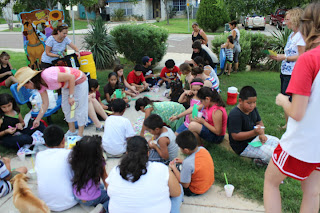 It really was a great week.  My boys played (Josh - bass & Jacob on the drums) at a church on Wednesday night as well as at a block party on the last night we were there.  The block party was the same night as flooding rain hit Laredo.  The border between the US and Mexico expanded a bit while we were there.  My Jessica told the story at VBS one day with an interpreter.  It was her first time to speak with an interpreter but she did great.  She said it was a little hard to remember to pause & let the interpreter go, a fact that I know all too well.  It was such a privilege for me to be on mission with my kids and to see them in action.  In fact, not just the kids that I birthed but all the students we took down there did a fabulously wonderful job.  For real, there was no complaining, no fussing, NO DRAMA, and, believe me, we asked a lot of those kids and adults.  We got a lot of hard work and the joy of seeing people saved and, hopefully, lives changed.

I've got some other big news from our family but I can't stick it here at the end of this blog so I'll be back (hopefully) real soon to write all about what God is doing in our family!

Until then, stay cool - man, we are having some hot days here in North Texas!