It's Official, He's a Patriot 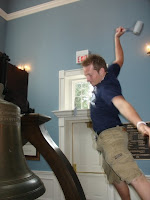 Johnny and I took Josh to Orientation and Registration at DBU this week. It was a day and a half event. Josh spent the night on campus, in the dorm, and attended student stuff while Johnny and I attended the parent stuff. The second day is when he actually registered for classes and we got the bill. Wow! We saw the grand total before any of his scholarships or student aid were subtracted -- it took my breath away. After students register for the first time at DBU and they are officially a Patriot, they get to ring the bell. It's the only time they can do it legally. So, here's Josh ringing the bell. An upperclassman was there encouraging the guys and taking photos.

If preparing a child to go off to college isn't enough to make one feel older then I got a little more encouragement in that direction today. I have not been sleeping well lately. In fact, I've been waking up really early -- and I am one who needs my sleep. As I've always said, "I need my beauty sleep and it's not my outward beauty that I'm talking about!" But, I've been waking up early and this morning I was awake at a time that begins with a five. Johnny and I left, went to the gym and got back home before any of our kids even woke up. Anyway, I was commenting about waking up early to my daughter later and she said, "Man, mom, you're getting old.'' Thanks a lot. (In case you're wondering, both of my daughter's grandmothers are early risers and so she equates that to being old. Not that the grandmothers are old, but you get the picture.)

Thankfully, we invited some young families over to swim today. There were 5 kids here (not belonging to me or my kids' posse) and the oldest was 7. Youngness was here and I was a part of it!!

Jeanette
Posted by Jeanette at 7:57 PM

Yay for DBU!!!! Mom told me she saw your names on the list for incoming freshman. Josh will love it. My brother will be a junior this year and he LOVES DBU. I know you must be so proud. :)

Hey, thanks for the visit to my blog and for your encouragement. I see you have crossed this bridge before. Congrats to your boy.