The First Colony and American Independence 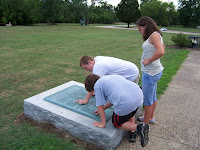 Or, should I have titled this "The Great Adventure - Part 3"? Today was full of history lessons. We walked all around Jamestown and then Yorktown. Jamestown is celebrating the 400th anniversary of the settlers first landing there. It was amazing to hear and read the stories, to see real artifacts, and to find out what life was really like for those early pioneers. Just about 20 miles away is the site where Cornwallace surrendered to George Washington and America's independence was won! It was so interesting to see where the French came into the York River to the aid of those fighting for freedom. Freedom really isn't free ... I guess I am amazed at what so many people were willing to give up, what they were willing to sacrifice to gain something that was worthy of having. Sure, the first British that came over to Jamestown were really seeking to make a fortune in the new world, but what they found was a great deal of hardship. Yet, they kept coming...
Today really was an adventure -- in more ways than one.
Serving the King,
Jeanette
Posted by Jeanette at 10:48 PM